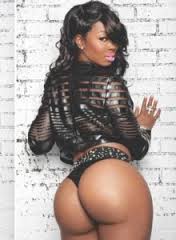 African American women have had booty for centuries. Is Vogue magazine blind or just plain ignorant? Why are White women getting credited for a physical attribute that we were born with (yet they pay for)? Another example of credit not going to where credit is due.

What happens when you try to be provocative and write about something that you obviously have no clue about? An article titled “We’re Officially in the Era of the Big Booty,” with references to Jennifer Lopez, Iggy Azalea, Kim Kardashian and Miley Cyrus, happens.

Patricia Garcia writes in Vogue magazine, “For years it was exactly the opposite; a large butt was not something one aspired to, rather something one tried to tame in countless exercise classes. Even in fashion, that daring creative space where nothing is ever off limits, the booty has traditionally been shunned.”

Obviously Garcia hasn’t hung out around black people for much of her life. Or only knows three: Nicki Minaj, Rihanna and Beyoncé, who are cited in the article.

As I’m sitting here—on my well-endowed derriere, as a matter of fact—I can’t help wondering why butts are now en vogue. Oh, wait, is it because there are nonblack women now carrying the extra baggage of Sarah Baartman?

Let’s take a look at the butts Garcia refers to.

Sure, J.Lo has been around for decades, from her start as a Fly Girl on In Living Color to a pop star and actress. Lopez’s butt made her famous back in the day. But guess what? Take that 6 train that J. Lo sang about, and on any given day you’ll see hundreds of butts even more impressive than hers.

And then there’s Azalea. Sorry, but I’m going to need receipts. By receipts, I mean it looks store-bought. Along with Azalea’s fake blaccent, I’m wondering if she rocks a Depends diaper or had some silicone pumped into her rear.

Allow me to say one word about Cyrus even being a “thing” in the article: No.

When social media got wind of the Vogue article, it didn’t exactly go over too well, and the hashtag #voguearticles was created.

I’m going to let the folks at Vogue have their fun with their little article, because honestly, I’d rather not have any black female celebrity whom I hold dear even mentioned in such a way. What it boils down to with the list Garcia made is that the assets on these women she mentioned are nothing new. Black women have been carrying around the weight of the world for some time. We’re appropriated but never appreciated, even down to our asses.

*Article originally posted on The Root.

I don’t know if it’s true or not, but it seems that Kanye West & Kim Kardashian made the cover of next month’s Vogue magazine. If this is true, how in the world did this happen? Wasn’t Vogue supposed to be the premiere international fashion magazine?

According to their company overview Vogue strives to be “thought-provoking, relevant and always influential, Vogue defines the culture of fashion.” But how is allowing Kim Kardashian on the cover ‘defining the culture of fashion’? Nothing that she has said, done or worn has been influential to the typical Vogue reader. Their readership is one of class, style and elegance not trendy, trashy or “common”. Kim’s clothing as of late has been quite underwhelming, as I’m sure most fashionista’s would agree.  I mean her clothing line is in Sears, for pete’s sake! How Vogue worthy is that?

Let’s look at Kim’s accomplishments, shall we? She made a sex tape, dated professional athletes back-to-back with no real job or income, never attended college, has been divorced from two different men all by the age of 30 and  had a baby out of wedlock. How is this Vogue-cover material? Why has she been selected to be on the same magazine as our First Lady Michelle Obama, Academy Award© winner Sandra Bullock, international fashion icon Victoria Beckham and multi-platinum 17-time Grammy winner Beyonce? She doesn’t compare to anyone on that list whatsoever.

April is Autism awareness month. Wouldn’t it have made more sense to let someone like Holly Robinson Peete or Oscar winner Kate Winslet grace the cover instead? Both of them have made great strides in the autistic community & are also known for their stylish dress. Really, anyone else but Kim would’ve made a better cover choice!

So how did Kim get the cover of Vogue? Most people seem to attribute it to her boyfriend, 21-time Grammy award winner Kanye West. He was seen cajoling the Editor-in-Chief, Anne Wintour, for the coveted spot almost a year ago at which time she was less than enthused about putting about Kim Kardashian on the cover of her magazine. According to close sources, it’s pretty well-known that Anna Wintour is NO fan of Kim or any reality star appearing in the pages of the magazine. But she claims that simply isn’t the case. West has said publicly many times that he thinks his girlfriend belongs on the cover of Vogue. He’s even gone so far as saying “No one is looking at what Obama is wearing.”  “Kim is like the most intriguing woman right now. … and collectively, we’re the most influential in clothing.” Why would he say something that crazy?! Not only did he disrespect our First Lady, but he made it sound as if Kim Kardashian has an intimate knowledge of fashion, textiles or even class for that matter!  I guess some women really can sleep their way to the top.

Let’s take a look at some of the reactions from some (now former) Vogue readers:

“I cancelled my subscription!” – Michelle A. Morgan

“I am loving the big backlash aimed at Anna Wintour for putting Kim Kardashian on the Vogue cover. The issue should come with a barf bag.” – Nikki Finke

“Hope the happy couple coughed up a lot of dough to Vogue for the “honor” ’cause I suspect Vogue sales will be at an all-time low very soon, to match their all-time low cover choice.” – nonparieldolls

“Isn’t it funny how Kanye ended up with the exact same kind of woman he sings about in his song Goldigger? Ironic. These two are hideous!” – Pbj

“I’m really torn. Am I supposed to admire a woman that is only famous for a sex tape, had a marriage last just over 70 days, got pregnant from another guy before her marriage was dissolved, slept with half the NFL and got engaged to a guy who’s inflated ego could block enough sun to reverse global warming? Or should I applaud Vogue for reminding us that no amount of money will ever buy class?” – Smedley N

“Dear #Vogue there is a difference between controversial and classless. Learn it!” –The Fashion Law

So readers now it’s your turn, let Vogue know what you really think. Use the Twitter hashtag  #WorldsMostTalkedAboutCouple with your comments. You know I already have!