I hate when people refer to certain names as “ghetto” because it usually has such a negative connotation.  When I first heard the word I thought it was referencing unusual-sounding names but now I know that it is referencing difficult-to-pronounce names. I’ve written about pronunciation before, but now I would like to talk about so called “Black names”.

Some African Americans have chosen to give their children some very unique names. Some of these names I can’t pronounce nor would I care to, however, I do applaud their creativity. Some argue that Black people shouldn’t name their children “crazy names” because that automatically sets their children up for failure – failure to have a meaningful career or to be taken seriously in life. Many studies have shown that job candidates who submit resumes with “Black-sounding” names have a significantly less chance of being interviewed than candidates who submit resumes with “White-sounding” names with the same credentials. But whose fault is that – the job candidate or the racist person that’s reviewing the resumes? (I think you can tell my answer on that one)

There are so many people in this country with different names. Indian names, Hispanic names, Italian names, Armenian names and the list goes on & on. Don’t think so? Here are some examples of what I’m talking about:

But nobody thinks that these names are obnoxious. Nobody questioned why Sarah Palin named her children Bristol, Trig, Willow, Track or Piper Palin. And nobody questioned why Mitt & Ann Romney named one of their sons Tagg, or why Demi Moore & Bruce Willis named their daughters Talluluh, Rumor & Scout. So if there are so many unusual sounding names from non-Black parents, why are so-called “Black names” always picked on?

What’s wrong with Black parents naming their children what they want? Why should they have to conform to the social norm by using plain “White” names? Not being able to pronounce a name doesn’t make that name stupid. My name is part of my identity & if someone thinks I have a “crazy” name then that just shows how ignorant that person is for several reasons: 1) I didn’t name myself, so if you have a problem with my name that should be taken up with my parents, 2) Just because you’ve never heard of something before (like a name) doesn’t mean it’s a bad name, that just means it’s different and 3) There is no law saying that names have to make sense phonetically, have historic or family value or follow the rules of English.

I’ve said it before & I’ll say it again – Get used to having to learn difficult names, America. Immigrants are moving to this country in droves. Over 10% of our nation is comprised of immigrants, many of which may have difficult-to-pronounce names. So as our country grows & people from all over the world continue to move here, names like “John” and “Ashley” are becoming less & less popular. I thought the whole point of living in America is to have freedom of choice, right? Well, freedom of choice includes people naming their children what they want to name them.

Children of color are unfairly judged based on the name their parents gave them. If you think little “Jamal” is not going to amount to much it’s probably because of how people treated him based on a  name which he had no control over. (Jamal, by the way is an Arabic name, not a Black one)

So before you judge someone named Trayvon or Shantal, just remember: “No one has the opportunity to give an opinion on the name they are given.” 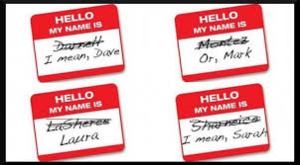 Below is an article from the Daily Beast that speaks on racially charged names. Check it out –

Are Black Names ‘Weird,’ or Are You Just Racist?

Reddit isn’t just a clearinghouse for interviews, animal pictures, and crazy stories. It’s also a place where people ask questions and have discussions. Yesterday, one user wondered about “black” names, posing a question to the “Black American parents of Reddit,” as he put it. “Before racism is called out, I have plenty of black friends,” he noted, raising the question of why he didn’t ask these alleged friends. “[I’m] just curious why you name your kids names like D’brickishaw, Barkevious D’quell and so on?”

Setting aside the many problems with this question—for one, “Black American parents” aren’t a monolith–there’s an actual answer here. In a 2003 paper for the National Bureau of Economic Research, economist Roland Fryer found two things. First, that names like Reginald and Kiara are far more likely among black children than names like Jake and Molly, and second, that this is a recent development. In the 1960s, Anglo-American names were common among African American children. It wasn’t until the 1970s and the rise of the Black Power movement that this shifted in the other direction. ”The underlying philosophy of the Black Power movement,“ writes Fryer, ”was to encourage Blacks to accentuate and affirm black culture and fight the claims of black inferiority.” The adoption of “black” names is consistent with other cultural changes—like “natural hair”—prompted by the movement. African Americans wanted to distinguish themselves from whites, and naming was an easy means to the end.

Of course, there are plenty of African Americans who give their kids Anglo names. The idea that they don’t—that all black parents use the same naming convention—is ridiculous. And popular culture notwithstanding, these distinctive names aren’t especially common. The most popular African American baby names—Aaliyah, Gabrielle, Kiara, Cameron, Jordan, and Nathan—are perfectly ordinary.

If there is a question worth asking about race and naming, it’s not “why do black people use these names?” it’s “why do we only focus on black people in these conversations?” Indeed, there’s a whole universe of (hacky) jokes premised on the assumed absurdity of so-called “ghetto” names. Derision for these names—and often, the people who have them—is culturally acceptable.

But black children aren’t the only ones with unusual names. It’s not hard to find white kids with names like Braelyn and Declyn. And while it’s tempting to chalk this up to poverty—in the Reddit thread, there was wide agreement that this was a phenomenon of poor blacks and poor whites—the wealthy are no strangers to unique names. The popular Netflix show Orange is the New Black, written by a Jenji Kohan (a white woman), was based on the experiences of a Piper Kerman (also a white woman). And in last year’s presidential election, nearly 61 million people voted for a Willard Mitt Romney, at the same time that the current head of the Republican National Committee was (and is) a Reince Priebus.

On Twitter, riffing off of the Reddit thread, I mused on this double standard with a comment and a joke. “Seriously, I will take your ‘questions’ about ‘weird’ black names seriously when you make fun of Reince Priebus and Rand Paul,” followed by “White people giving their kids names like Saxby Chambliss and Tagg Romney is a clear sign of cultural pathology.” If names like “DeShawn” and “Shanice” are fair targets for ridicule, then the same should be true for “Saxby” and “Tagg.”

Most of my Twitter followers got what I was going for. But after it was retweeted by a widely followed conservative, I was deluged with angry complaints from a host of people—mostly white men—who didn’t get the punch line. “So, names like Jamelle, Mo’nique, [and] Trayvon are normal?” asked one self-proclaimed conservative. Likewise, another asked if “Jamelle, LaShonda, Trayvon, etc. are signs of advanced, successful, economically stable and crime free culture?”, which was followed by someone wondering if “names like LaShaniqua, Jamal, Porsche, Mercedes” would be our “future leaders.” Each illustrating my point that unusual black names are treated as evidence of cultural inferiority in a way that isn’t true of unusual white names.

But these responses are more than just the angry comments of Twitter racists. They underscore the extent to which our ideas of normality are tied closely to socioeconomic status. If we focus on “weird” African American names in jokes and conversation, it’s because blacks remain at the bottom of America’s racial caste system. “Hunter” is just as unusual as “Malik,” but it’s understood as “normal” because of its association with white men. It’s arbitrary, yes, but it reflects who holds power. Indeed, if the situation were reversed, odds are good there would be plenty of jokes about “dysfunctional” white people who name their children “Geoff.”

It should be said that this has material consequences in the real world. Research has consistently found that job applicants with “black-sounding” names are more likely to be rejected, regardless of qualifications. If races are our castes, then this makes sense, since—in a caste system—your status is mostly a function of your position. “Latoya” could be well-qualified for the law firm she applies to, but there’s a fair chance her “black” name marks her as undesirable.