#28DaysAreNotEnough is a comic styled after “Ripley’s Believe It Or Not,” where artist Joel C. Gill introduces heroes from African-American history.

Bessie Stringfield, “The Negro Motorcycle Queen” In the early 1930’s and ’40’s

Bessie travelled the United States on a motorcycle and became the first African-American woman to be admitted into the American Motorcycle Association Hall of Fame and the Harley Davidson Hall of Fame. She was a motorcycle carrier, she was married 6 times, she was just the basic adventurer. Bessie would go on “penny tours” — she would throw a penny on a map and when it would land on a place, that’s where she would go. If she ran out of money she would perform bike tricks at arenas. This was a time when not only were women not allowed to drive motorcycles, but black women were not even really allowed to drive motorcycles. 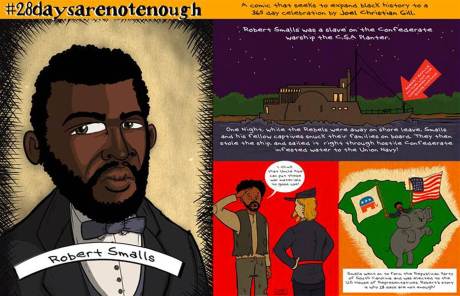 Tom Wiggins was an autistic savant and a former slave. He was pitched in with the sell of the parents because he was blind and they did not think he was worth anything. But it turns out that Tom was a musical genius and who could listen to sounds and could mimic and play them. He was sold to a musician, a stage manager, and the manager would take him on road shows where Tom would challenge any professional in the audience to copy a piece of music. He toured for the confederacy. Later in life, he was billed as “the last American slave,” because of the contract negotiations between his family. Once they were all free, Tom went on to write amazing music. 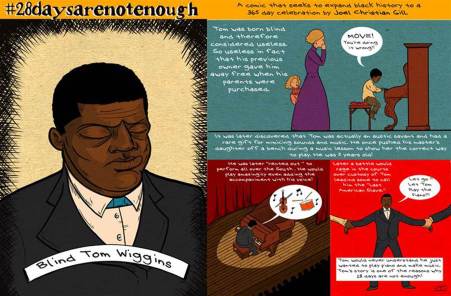