The stamp honors Robert Robinson Taylor (1868-1942). The son of emancipated slaves, he was the first black student to attend the Massachusetts Institute of Technology (MIT).  When he graduated in 1892, he became the first fully accredited African-American architect in America.

During his time at MIT, Taylor met Booker T. Washington.  President of the Tuskegee Institute in Alabama, Washington focused on education to fight discrimination in the post-Civil War South.  He was impressed with Taylor and recruited him to teach at the school.

As the drafting instructor and architect to the Tuskegee Institute, Taylor was dedicated to promoting Washington’s self-help philosophy.  His architectural debut, Science Hall, was constructed entirely by the students, right down to the bricks.  But Taylor’s second project, the Tuskegee Chapel, was his proudest accomplishment.  Washington once referred to it as the most imposing building on campus.  Taylor’s designs and structures were said to epitomize the institute’s standards of excellence.

Taylor spent the majority of his career at Tuskegee.  He became a model of achievement   through his many contributions – a symbol of pride for the Tuskegee Institute and the nation. 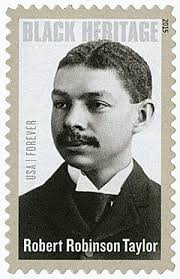