Katherine Dunham revolutionized American dance in the 1930’s by going to the roots of black dance and ritual and transforming them into significant artistic choreography that speaks to all. She is a pioneer in the use of folk and ethnic choreography; she is one of the founders of the anthropological dance movement. She showed the world that African American heritage is beautiful.

Dunham prepared herself by dancing and performing throughout her youth in Peoria, Illinois, by her graduate studies in social anthropology at the University of Chicago, and by living among the native in the West Indies.

Between her initial education and her appointment to Southern Illinois University in 1967, Ms. Dunham did ground breaking work in every aspect of dance, theater, music and education. She danced, choreographed, and directed on Broadway. She danced with Les Ballet Negre, the first black ballet company in the United States, and appeared in the films “Stormy Weather” and “Cabin in the Sky” which she co-choreographed with George Balanchine. Dunham chose to leave Hollywood soon after to create a more culturally comfortable place for American black people to perform, in East St. Louis, Illinois. She formed the Katherine Dunham Dance Company, which toured in more than 60 countries, amassing cultural and theatrical experiences, which would be recounted in eight books, numerous articles and short stories which she wrote.

One scholar called Katherine Dunham “a hip swinging anthropologist”; “the hottest thing to hit Chicago since Mrs. O’Leary’s cow kicked the bucket” and “an authoritative interpreter of primitive dance rhythm.” She made her debut as a dancer on Broadway in the1930’s sporting a birdcage on her head and a cigar in her mouth. Such accoutrements are standard for the ladies who circulate around Caribbean ports, which her anthropological studies had taught her.

Throughout the years, Katherine Dunham continues to fight for racial equality. She devoted much of her talent and insight to re-directing the energy of violent street gangs through the performing arts. Her work resulted in the formation of the Performing Arts Training Center. She also founded the Katherine Dunham Museum and Children’s School, which continues today.

Ms. Dunham is the recipient of ten honorary doctorates, numerous awards, including the Kennedy Center Honors. As well, she continues to receive the admiration and devotion of the hundreds of students and colleagues whose lives have been enriched. Women’s International Center is privileged to offer the Living Legacy Award to a magnificent teacher, dancer, choreographer, actress and humanitarian, Katherine Dunham. 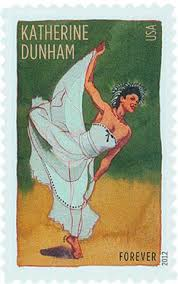