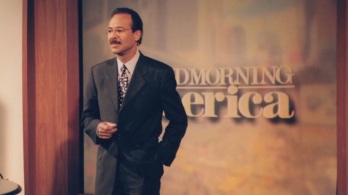 Among the meteorologists who provide weathercasts on the broadcast networks’ popular morning news programs, Spencer Christian has set the tone as an amiable provider of the nation’s rain or shine outlook to millions of viewers. Christian, who often fills in as co-host with Joan Lunden on Good Morning America, has been described by TV Guide’s Marvin Kitman as “an intelligent, entertaining, likable fellow, not a somber bone in his body.”

Spencer Christian was born in July of 1947 to Spencer Christian Sr. and Lucy Greene Christian in Newport News, VA. He spent the late 1960s as an English major at Virginia’s Hampton College, and also served in the U.S. Army Reserves. After graduating with a minor in journalism, Christian taught school at the Stony Brook School, a private secondary institution on Long Island. However, in 1971, he moved back to Virginia to take a job at WWBT-TV in Richmond. He worked as a news reporter for one year. When the station’s weathercaster quit, Christian’s boss approached him and asked if he knew anything about meteorology. “I told him that the upper-level winds moved from east to west and steer the frontal systems. He said, That’s enough for now. We need you to fill on for a couple of weeks,” Christian recalled to Ebony writer Douglas C. Lyons. Christian wound up remaining the station’s weathercaster for three years before taking a similar job in Baltimore.

At Baltimore’s WBAL-TV, Christian honed his skills as a meteorologist. In addition to preparing and delivering weather forecasts, he also hosted a weekly half-hour talk show called Spencer’s World. His special five-part news report concerning the decline of verbal skills in America entitled “Does Anyone Here Speak English?,” which he produced and narrated, won an Emmy. His on-air successes soon brought him to the biggest market in the country-New York City. Along with his wife, Diane Chambers Christian and their two children, Spencer moved to the Big Apple in 1977 when he was offered a job at WABC-TV. After four years as a weathercaster, he switched to the sports department in 1981. He occasionally filled in as weathercaster on ABC’s highly-rated morning news program, Good Morning America.