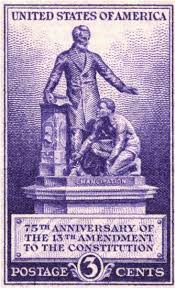 The 13th Amendment to the U.S. Constitution, ratified in 1865 in the aftermath of the Civil War, abolished slavery in the United States. The 13th Amendment states: “Neither slavery nor involuntary servitude, except as a punishment for crime whereof the party shall have been duly convicted, shall exist within the United States, or any place subject to their jurisdiction.

On January 31, 1865, the House of Representatives passed the proposed amendment with a vote of 119-56, just over the required two-thirds majority. The following day, Lincoln approved a joint resolution of Congress submitting it to the state legislatures for ratification.

The year after the amendment’s passage, Congress used this power to pass the nation’s first civil rights bill, the Civil Rights Act of 1866. The law invalidated the so-called black codes, those laws put into place in the former Confederate states that governed the behavior of blacks, effectively keeping them dependent on their former owners.

Congress also required the former Confederate states to ratify the 13th Amendment in order to regain representation in the federal government. Together with the 14th and 15th Amendments, also ratified during the Reconstruction era, the 13th Amendment sought to establish equality for black Americans. Despite these efforts, the struggle to achieve full equality and guarantee the civil rights of all Americans would continue well into the 20th & 21st century.