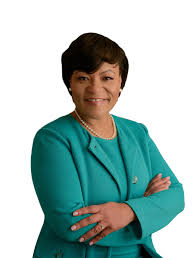 Mayor Cantrell’s life has been steeped in community service. As a little girl, her grandmother would bring her to neighborhood meetings, and by the age of 13, she was serving as secretary for her local chamber of commerce.

“My soul found its home in New Orleans,” is how Mayor Cantrell describes her arrival in 1990 as a student at Xavier University. After graduation, she and her husband, Jason, bought a home in the Broadmoor neighborhood, and Cantrell became an active member of her new community.

As the President of the Broadmoor Improvement Association, Cantrell led the neighborhood’s redevelopment following Hurricane Katrina and the levee failures. Flooding decimated Broadmoor, but through citizen engagement and Cantrell’s leadership, Broadmoor is now considered an international model for disaster recovery.

Elected to the City Council in 2012, Cantrell has prioritized improving people’s lives.

On May 7, 2018, Mayor Cantrell was sworn in as the first female Mayor of New Orleans, just in time to celebrate the city’s tricentennial, or 300th anniversary.

She is a dedicated wife to her husband, Jason, proud mother of her daughter, RayAnn, and a parishioner at Blessed Trinity Catholic Church.

Mayor Cantrell pledges to produce results that will create a more equitable and safe New Orleans for all residents.