Skip to content
Some people have the false notion that whoever forgives loses power or control.
Some people feel that if someone else has wronged you in such a way that still haunts your thought life to this day, then that person does not deserve
forgiveness.
However, forgiveness is not about the other person being ‘vindicated’ it’s actually about you – it’s about you being FREED from them, and what they did to you.
Whether it was the absent father, the cheating boyfriend, or the relative you trusted who turned around and molested you – no matter the case the person who forgives actually has the most power – and that power is the power to love, in spite of, which is a true indicator that Christ’s love truly resides and abides deep down on the inside of you.
Matthew 6:14-15 reads, For if ye forgive men their trespasses, your heavenly Father will also forgive you.  But if ye forgive not men their trespasses, neither will your Father forgive your trespasses.
The word, trespasses, in this passage of Scripture means, a side-slip, deviation, unintentional error or willful transgression.
So whether the person meant to hurt you or whether they didn’t mean it, God expects you to forgive them either way. Know that God never sets an expectation that you don’t have the ability to fulfill; because the Love of God is shed abroad in your heart (Romans 5:5) you do have the ability to forgive residing on the inside- and you should definitely be thankful for that 😉 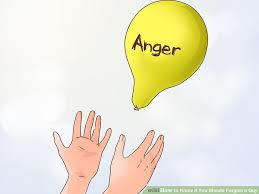 *Originally published on Kim on the Web.