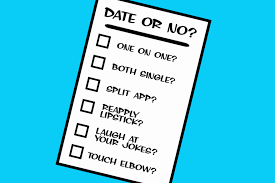 If a man asks you out & then when you show up he tells you it’s not a date, what would you think?!

A man that I had been talking to for several weeks asked me to come to his job so he could give me a tour (he works for a company that sits on over 100 acres, has a museum, several buildings, a laboratory and a gift shop). Afterwards, he said we could go to dinner and because he seemed like a nice guy, I agreed.

He said he had never asked a woman to come to his job before (except for his mother, who I’m sure was so proud of her baby boy), so the day-of I went out of my way to make sure that I looked my best. I got my hair done, and even purchased a new outfit just for this occasion. I was going to this man’s job & I wanted to look nice not just for him but for any of his work colleagues we might run into. Because of traffic I got to his office a little late but when I finally arrived, he seemed really glad to see me. He took me on a tour of his job and we ended up in his office where we talked about some of the things that he was working on and what else he wanted to accomplish in his career. By the time we were done talking about everything work-related it was time to eat so we got in his car & headed to a nearby restaurant for dinner.

As we walked towards his car, he opened the door for me and that’s when he said it: “I know I’m coming from work but I didn’t change clothes because this isn’t a date.” Right after he said this, he closed my car door & all I could think was how could this not be a date, if he asked me to be here?! I was quiet the rest of the car trip because I was confused. How could he invite me to his job, take me to dinner and it not be considered a date?

Was I reading more into this than I should have? When a man asks you to come to his job, aka his place of employment, doesn’t that mean anything? Why invite me at all; I certainly didn’t ask to be there. And when he mentioned that we could get something to eat afterwards, while that may have been just a “gesture of courtesy”, I took that to mean he wanted to go out to dinner with me (especially since we both could’ve gone our separate ways for dinner).

Over dinner, the conversation got a little more personal. We shared old college stories (we both attended similar colleges), talked about his family and upcoming events we both wanted to attend in our area. At the end of dinner (which he paid for), he took me back to my car, gave me a hug and just like that, our evening was over!

One online website defines dating as “a stage of romantic relationships in humans whereby two people meet socially with the aim of each assessing the other’s suitability as a prospective partner in an intimate relationship or marriage.” While dates can come in many different forms, when one person feels like they are on a date, even if the other person hasn’t explicitly said that they are, then it’s still a date. It might not be an enjoyable one & there might not even be a second date, but if one person asked the other out & they both people agreed to go, then, it’s still a date.

I don’t know why he said we weren’t on a date, unless he was using that as an excuse to take me out on a real date in the future.