Kofi Annan was UN Secretary General from January 1997 to December 2006. One of his main priorities during this period was a comprehensive program of reform that sought to revitalize the United Nations and make the international system more effective. He was a constant advocate for human rights, the rule of law, the Millennium Development Goals and Africa, and sought to bring the organization closer to the global public by forging ties with civil society, the private sector and other partners.

At Mr. Annan’s initiative, UN peacekeeping was strengthened in ways that enabled the United Nations to cope with a rapid rise in the number of operations and personnel. It was also at Mr. Annan’s urging that, in 2005, Member States established two new intergovernmental bodies: the Peacebuilding Commission and the Human Rights Council. Mr. Annan likewise played a central role in the creation of the Global Fund to fight AIDS, Tuberculosis and Malaria, the adoption of the UN’s first-ever counter-terrorism strategy, and the acceptance by Member States of the “responsibility to protect” people from genocide, war crimes, ethnic cleansing and crimes against humanity.  His “Global Compact” initiative, launched in 1999, has become the world’s largest effort to promote corporate social responsibility.

Mr. Annan undertook wide-ranging diplomatic initiatives. In 1998, he helped to ease the transition to civilian rule in Nigeria. In the same year, he visited Iraq to resolve an impasse between Iraq and the Security Council over compliance with resolutions on weapons inspections and other matters; this effort helped to avoid an outbreak of hostilities which was imminent at that time. In 1999, he was deeply involved in the diplomatic process that led to Timor-Leste’s independence from Indonesia. He was responsible for certifying Israel’s withdrawal from Lebanon in 2000, and in 2006 his efforts contributed to securing a cessation of hostilities between Israel and Hizbollah. Also in 2006, he mediated a settlement of the dispute between Cameroon and Nigeria over the Bakassi peninsula.

Mr Annan’s efforts to strengthen the Organization’s management, coherence and accountability involved major investments in training and technology, the introduction of a new whistleblower policy and financial disclosure requirements, and steps to improve co-ordination at country level.

Kofi Annan set up the Kofi Annan Foundation in 2007 to mobilize leaders of all sectors to provide leadership where it needed. The Foundation works on the premise that there can be no long-term peace without development and no sustainable development without peace. And no society can long remain prosperous without the rule of law and respect for human rights.

Mr. Annan believes that the expertise and evidence needed to solve pressing problems such as poverty, violent conflict and poor governance in most cases already exists. Progress is held back too often due to a lack of leadership and of political will to use it to identify and deliver solutions.

With the Kofi Annan Foundation, Mr. Annan mobilizes political will to overcome threats to peace, development and human rights.

Kofi Annan’s widely acclaimed memoir: Interventions: A Life in War and Peace was published in 2012. Kofi Annan was born in Kumasi, Ghana, on 8 April 1938. He is married to Nane and between them they have three children. 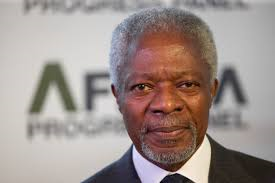