For nearly the past 45 years, Father’s Day has become a national day of recognition for fathers across the country to celebrate, honor and sometimes even unite families who have a father figure in their lives. If you have a stepfather, grandfather, uncle or biological father, this coming Sunday most of us will be celebrating these special men in our lives. Whether it’s going out to eat, shopping or even the movie theatre, all day long we will all hear these 3 little words over & over again: “Happy Father’s Day!”

You see, the hard part about throwing out the phrase “Happy Father’s Day” to every man I see on Sunday is that I don’t know whether or not he is a good father. There is no way I can know what kind of father you are unless I’ve met your children or at the very least, the mother of your children. Making babies does not constitute a good father, no matter how many children you may have & no matter how much child support you may be paying. Even if you have been physically present for your children, it doesn’t necessarily make you a good father. There are many abusive and destructive dads out there who don’t deserve the recognition of Father’s Day.

You see, there is so much that goes into being a good dad. Were you there during everyday life events, not only the important ones? Do you have a good relationship with the mother of your children? After all, being a good dad is more than just how you treat your children, it also involves the type of example you set as a man overall. Were you financially responsible for your children for their entire childhood? Showing up every now & then might be easy for some men to do but for others spending quality time with their children might be like pulling teeth. Did you teach your children about life? Did you open up your world to them so they can see you being a man, not just a dad? Additionally, how do others regard you as a father when your children are around?

There is so much that goes into being a good dad. A mere 24 hours out of the entire year does not do good father’s justice. However, I look forward to celebrating my dad this year because of all that he means to me. My dad has been married to my mother for over 35 years and has been there for me since the day I was born. He had a strict policy on dating (he wanted me to wait until I was at least 40 – lol!), taught me how to save $0.10 from every dollar I earned and “dated” my mother even though they were already married so I could see a living breathing example of what true romance is. Whether I was going through my awkward pre-teen years or even now as an adult woman coming into her own, my dad was & is still here for me. So, the only person I wish a “Happy Father’s Day” is my own father. I know for certain what kind of father he is because I know what kind of person I turned out to be. My dad understood that the role of a good father doesn’t start with child support, nor does it end when your child turns 18. Instead, it’s about being a good man, a good husband, and then a good father.

Let’s face it, we don’t know whether or not a man is a good dad just because he has children. After all, just about anyone can father a child, but it takes an exceptional man to do the job well. Perhaps the phrase “Happy Father’s Day” shouldn’t be thrown around so casually, but instead reserved for the real men who deserve it. 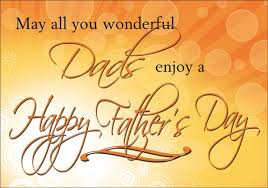