It’s my world too. Strollers don’t inherently have the right-of-way.

I was in love with Marion in that way you fall in love with your best friend. She’d pick me up like a pile of laundry and scrub me clean after every bad breakup, and there were many. She was my rock, she was the one friend I wasn’t embarrassed to introduce to my parents, she was my favorite person in the world… until she had her child.

Marion and I promised ourselves we wouldn’t turn into one of those bargaining-with-their-kids parents, one of those pushover parents, one of those newfangled spiritual let-your-kid-be- whoever-the-Goddess intended parents. Yes, we’d have kids, but we’d be better, smarter, and stricter. We wouldn’t be those people who would make other people feel embarrassed for us because we have rotten kids. Then, in different ways, we both failed to keep those promises. She became one of those parents, and I closed my baby factory forever.

After Marion married Phil, they tried desperately to have a child and after two years, they had Daisy. Marion’s pregnancy was unremarkable. Even her daughter’s first year didn’t raise any red flags. It wasn’t until Daisy’s second year that my friend Marion started showing signs of what I consider dysfunctional parenting.

Our friendship probably held steady for as long as it did because Marion and Phil moved to Missouri shortly after Daisy turned two. There wasn’t enough proximity to destroy our friendship. When I finally went to visit them, their daughter was already 4. I had missed the in-between years: the transition from Marion, my friend, to Marion, Daisy’s mom.

My second day, I walked in to see Marion breast-feeding Daisy. Marion and Phil are very tall and Daisy had inherited their height. Seeing a child at her length sucking on Marion’s teat was like watching a Great Dane climbing a sapling. I thought: OK, breastfeeding is cool. Look away. Look away. Dear God, why can’t I look away?

The fifth day, Daisy allowed us to leave the house without throwing a fit. We went to a sushi restaurant. Twenty minutes into dinner, Daisy stripped off her clothes and ran through the restaurant, peeing, with Phil running after her pleading, “Daisy. Sweetheart. We don’t do that. We don’t do that,” in a voice that made Daisy “do that” even more. We were asked to leave by a woman who leered at me like it was my fault.

The rest of my 10-day visit didn’t go much better. When Marion finally dropped me off at the airport, I left the family of three and any desire to have kids in my rearview. I haven’t seen Daisy (now 8), Marion, or Phil since, except on Facebook.

I felt like such a horrible person for despising the kid until I stumbled upon Alfie Kohn’s Washington Post article in which he blames milquetoast-y modern-day parents for “raising a generation of undisciplined narcissists who expect everything to go their way.”

My friend and her husband aren’t bad people. They are among a demographic who find themselves victims of a cycle. Like the 5 Stages of Grief, I call this ‘The 5 Stages of Progressive Parenting’:

Denial. Knowing other people are staring at you and your screaming child, but pretending they’re not.

Anger. You’re outraged that other people want to come up to you and say “You have a horrible sushi-ruining kid.” Instead, they shake their heads or leave. Like a deadly fart, a bad child can clear a room.

Bargaining. The act of offering something for nothing. “If you are good, I’ll give you $5!” Or the time Marion said, “If you stop kicking Aleks, Mommy will make you cookies!” This tactic only works temporarily, if at all. With Daisy, “temporary” meant twenty minutes, or until she had finished her cookie. It can work permanently for losing friends, though.

Depression. Marion would sometimes look down-to-the-bone exhausted, her face damp from residual tears. She would smile when she caught me looking but we both knew she wanted to die some days.

Acceptance. Realizing that this is your life. Even after they go off to college, get married, have their own kids. This is your progeny, your legacy, and it’s forever. You are responsible for their beginnings until your ending, and you’re ok with that because you have to be. Forever.

Yes, Marion’s Daisy was the main reason I decided not to have kids, but she was not the only reason. My friends are at an age where they’re all having and raising children now — all spoiled monsters, the lot of them. Frankly, I know maybe two out of ten parents who have continued to be normal people who have successfully raised sweet, well-mannered kids, though I don’t want to hang out with them either.

When I tell people I would prefer not to be around kids or that I never want to have kids, they laugh uncomfortably. How can anyone hate kids? If those people are parents, they say I’m a bad person, or that I don’t know what I’m talking about, or I just don’t understand how nuanced the world of parenting is. What I know is this: It’s my world too. Strollers don’t inherently have the right-of-way.

When a friend has a child, it’s a loss for the childless friend. Maybe the new parent feels the same. I’ve never asked. I have to admit, sometimes I wish a woman like Marion had been my mom. My mother had no problem disciplining me, a lot. Maybe I would’ve been a happier adult if I had been allowed to eat sushi naked in a restaurant while peeing on myself. Who knows?

Of course kids can’t get enough of me. Like cats, if you ignore them, they’ll want to sit on your lap. I think they can sense I don’t like them so they circle me trying to get me to change my mind. Sometimes, if I don’t think about Daisy or Marion, I almost do. 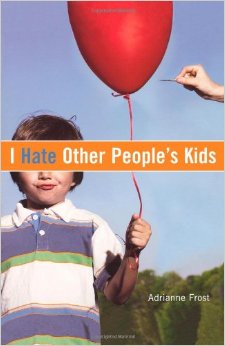