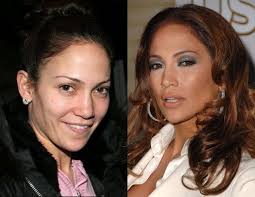 Women who wear makeup earn more and are treated better. This has steep costs, in both money and time.

On July 20, Hillary Clinton conducted a Q&A session on Facebook, and Facebook staffer Libby Brittain posed an unusual Q to her:

“Every morning, as my boyfriend zips out the door and I spend 30+ minutes getting ready, I wonder about how the ‘hair-and-makeup tax’ affects other women—especially ones I admire in high-pressure, public-facing jobs,” Brittain wrote. “I know these questions can seem fluffy, but as a young professional woman, I’d genuinely love to hear about how you manage getting ready each morning (especially during your time traveling as Secretary of State and now on the campaign trail) while staying focused on the ‘real’ work ahead of you that day.”

“Amen, sister,” Clinton responded, because she’s relatable. “You’re preaching to the choir. It’s a daily challenge. I do the best I can—and as you may have noticed, some days are better than others!”

It’s too bad Clinton punted. The “makeup tax” Brittain mentioned is very real. Women invest time and money into doing their makeup because it impacts their relationships and their paychecks. And while both genders tend to buy haircuts, shaving cream, and moisturizer, the price of makeup is something men never have to worry about.

The cosmetics industry makes $60 billion each year. The personal-finance site Mint claims the average woman will spend $15,000 on the stuff in her lifetime. It also costs time. My weekday morning makeup routine takes 10 minutes. That’s roughly an hour per week, or two full days per year. Last year, the Today show pegged this number even higher, at two weeks per year per woman.

I’ll pause now to address the most common response when this issue comes up: “Just don’t wear makeup!”

It’s true that some women never wear makeup for various reasons. Some look better without it than others do. Some object on principle, or prefer to maintain a vaguely earthy-crunchy vibe. Others simply don’t have the time, can’t afford it, or have jobs that don’t involve interacting with others.

But for many of us, showing up at the office or a bar without at least a swipe of blush and some mascara results in a day spent being asked if we have the flu. Amy Schumer nailed this phenomenon in her perfectly titled sketch, “Girl, You Don’t Need Makeup.” Its takeaway: The “just free yourself from makeup!” crowd, particularly its male contingent, has no idea how makeup-wearers look after they wipe it all off.

Most women wear at least some makeup, some of the time. The polls around cosmetic use are notoriously bad—they’re often sponsored by beauty companies—but they’ve reported that between 50 and 80 percent of women use it at least occasionally. (According to another survey, though, two-thirds of women wear fewer than three products daily.) When University of New Hampshire student Ann Marie Britton surveyed 137 of her classmates for a thesis in 2012, at least half of respondents said they were “likely” or “very likely” to wear makeup to class, work, a job interview, to socialize, or on a date. “Mascara was used in almost all situations,” she found.

But more importantly, women on TV wear it. Many of our moms wore it, as did our elementary-school teachers. Magazines bombard girls with tips on “looking flawless.” That’s just how women look, in the collective mind’s eye: With unnaturally shiny lips and dark eyes.

For men, the closest analogy to being stuck without makeup, for women who usually wear it, is being forced to wear a stained shirt to a meeting. It’s probably fine to run errands in a shirt with dribble of barbecue sauce down the front. (There’s even a country song about it!) But if a man were to arrive at work for an important meeting, having somehow forgotten that his shirt was stained, and finding himself without an emergency clean shirt to don, he’d probably feel deeply uncomfortable. I feel roughly the same way about my five most essential tubes of face-goo.

Makeup, in short, is a norm, and nothing ruins a first impression like a norm violation. Some women contend they only wear makeup to “boost their confidence,” but the reason they feel less confident when they don’t wear it is that there’s an expectation they will.

Makeup works by enhancing facial contrast—the color difference between your lips and nose, for example. Facial contrast is closely associated with femininity, and femininity with female beauty, in Western cultures. In a study I reported on last year, both male and female participants thought “regular” women looked best when they applied a moderate amount of makeup. Another study found that subtle makeup made women seem more competent, likable, and attractive.

Years of research has shown that attractive people earn more. Thus, the makeup tax: Good-looking men and good-looking women both get ahead, but men aren’t expected to wear makeup in order to look good.

It gets worse. One study found that participants were more likely to award “prestigious jobs” to women who were made up than to the same women when their faces were unadorned. Male (but not female) restaurant patrons tip more when female waitresses wear makeup.

I know, it’s terrible! I did not make the rules! Throw not your Bobbi Brown eye pencil in my general direction; tweet not your angry tweet at my difficult-to-spell username. In fact, “don’t shoot the messenger” seems to be the general attitude among researchers who study the economic effects of cosmetics.

“I wish society didn’t reward this,” Daniel Hamermesh, an economics professor at the University of Texas at Austin, told The New York Times. “I think we’d be a fairer world if beauty were not rewarded, but it is.”

So, what can be done about it? Workplace policies that allow employees to work from home, where their facial-contrast levels are judged only by their cats, could be an immediate help. So could including more bare-faced women in TV shows and magazine spreads.

For more enduring change, women could just stop wearing makeup. But unless we all did it in unison, it’s likely that the holdouts would continue to reap benefits while the au naturel protesters would continue to field questions about their thyroid health from strangers.

Or, the country’s only serious female presidential contender could, when asked, speak out against appearance discrimination and gender bias—something she herself has very publicly faced. That kind of response could help change the makeup norm, sister. 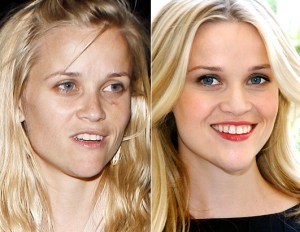 *Article originally published on The Atlantic.