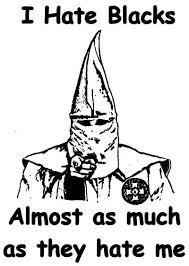 With everything that’s going on right now – a White woman passing for Black & lying about it, 9 innocent African Americans killed JUST because of the color of their skin, White judges using the N-word at their place of work – reinforces to me that racism is alive & kickin’. My problem is that there is only 1 group of people that are allowed to be racist: White people. People of color don’t get the luxury of being racist.

I don’t need to recount our US history – it’s a widely known fact that African Americans have been discriminated against far beyond their years of slavery. Everything from voting rights to jobs to justice have been withheld from us for decades upon decades. It’s no secret that White people have used their power & influence to suppress anyone who doesn’t look like or sound like them. From rejecting resumes with “unique” sounding names (Oh, I had a few things to say about that) to shutting down polling locations & hours to restrict the minority vote, to racist monikers of our nation’s President, racism is all around.

And don’t even get me started on all of the young Black men who have been murdered at the hands of White people in a position of power without any repercussions (Eric Garner, Mike Brown, Trayvon Martin, Tamir Rice, and the list goes on & on….) How can anyone with common sense honestly think that racism doesn’t exist in this country?! For me, there is a constant reminder that racism has the ability to affect my income, how I am treated in the store or even just my right to walk down the street.

But I don’t get the benefit of being racist nor does any other person of color. You see, I can’t choose to not engage with someone because of the color of their skin, or reject their resume/phone calls because they have a ‘White-sounding’ name. I don’t have the benefit of generational wealth or legacy due to the free labor my ancestors were able to profit from. I don’t get to open fire on a little White boy walking down the street wearing Polo shirts because he looks “suspect” and not expect to go to prison. I don’t get to sell drugs and expect a lesser sentence because I was selling crack & not cocaine. I don’t get to use racial slurs at work & keep my job. I also don’t get to go to college & make more money than someone else who has the exact same qualifications than I do because of the color of my skin. It just doesn’t work that way. I DON’T HAVE THE LUXURY OF BEING RACIST. And really, no one should.

White people need to stand up AGAINST racism. The more that African Americans are affected, the more it affects everyone else.

Thoughts? Comments? Fire at me in the comments section below –