Yaa Asantewaa was the queen mother of the Edweso tribe of the Asante (Ashanti) in what is modern Ghana.  She was an exceptionally brave fighter who, in March 1900, raised and led an army of thousands against the British colonial forces in Ghana and their efforts to subjugate the Asante and seize the Golden Stool, the Asante nation’s spiritual symbol of unity and sovereignty.

Yaa Asantewaa mobilized the Asante troops and for three months laid siege to the British fort of Kumasi. The British colonizers had to bring in several thousand troops and artillery to break the siege, exiling Queen Yaa Asantewaa and 15 of her closest advisers to the Seychelles. She lived in exile until her death in October 1921. Yaa Asantewaa’s War, as it is presently known in Ghana, was one of the last major wars on the continent of Africa to be led by a woman.

The Dahomey Amazons or Mino was an all-female military regiment of the Fon people of the Kingdom of Dahomey in the present-day Republic of Benin. They existed from the 17th century to the end of the 19th century. While European narratives refer to the women soldiers as “Amazons,” because of their similarity to the semi-mythical Amazons of ancient Anatolia, they called themselves Ahosi (king’s wives) or Mino (our mothers) in the Fon language.

The Ahosi were extremely well trained, and inculcated with a very aggressive attitude. They were ferocious fighters with a reputation for decapitating soldiers in the middle of battle, as well as those who were unfortunate to become their captives.

Seh-Dong-Hong-Beh was one of the great leaders of the Mino. In 1851 she led an army of 6,000 women against the Egba fortress of Abeokuta. Because the Mino were armed with spears, bows and swords while the Egba had European cannons, only about 1,200 survived the extended battle.

European encroachment into West Africa gained pace during the latter half of the 19th century. In 1890, King Behanzin used his Mino fighters alongside the male soldiers to battle the French forces during the First Franco-Dahomean War. The French army lost several battles to them because of the female warriors’ skill in battle. 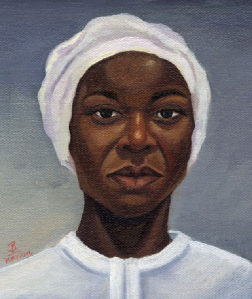 Queen Nanny, a Jamaican national hero, was a well-known leader of the Jamaican Maroons in the 18th century. Nanny was kidnapped from Ghana, West Africa, as a child, and was forced into slavery in Jamaica. Growing up, she was influenced by the Maroons and other leaders of the enslaved Africans. The Maroon people were enslaved Blacks who fled the oppressive plantations and formed their own communities in Jamaica’s interior.

Nanny and her brothers ran away from the plantation and hid in the Blue Mountains area. From there, they led several revolts across Jamaica. Queen Nanny was a well-respected, intelligent spiritual leader who was instrumental in organizing the plans to free enslaved Africans.

For over 30 years she freed more than 800 slaves and helped them settle into Maroon communities. She defeated the British in many battles and despite repeated attacks from the British soldiers, Grandy Nanny’s settlement, called Nanny Town, remained under Maroon control for several years.

Harriet Tubman was an African-American abolitionist, humanitarian, and Union spy during the American Civil War. Born into slavery, Tubman escaped to Philadelphia in 1849, then immediately returned to Maryland to rescue her family.

She subsequently made more than 19 missions to rescue more than 300 slaves with the help of the network of antislavery activists and safe houses known as the Underground Railroad. She later helped recruit men for John Brown’s raid on Harpers Ferry October 16-18, 1859, to free enslaved Blacks.

In June 1863, Tubman became the first woman to lead an armed expedition in the Civil War. She guided the Combahee River Raid, which liberated more than 700 enslaved Blacks in South Carolina: the largest liberation of enslaved Black people in American history.

Assata Olugbala Shakur (born July 16, 1947)
Assata Shakur is an African-American activist who was a member of the Black Panther Party and Black Liberation Army  between 1971 and 1973. Assata worked through the BPP and the BLA to fight racial, social, and economic oppression, but became the target of U.S. government’s counter-revolutionary COINTELPRO program. This program used a wide range of tactics, including framing, false imprisonments and assassinations of leaders, to disrupt the radical movement.

Between 1973 and 1977 in New York and New Jersey, Shakur was indicted ten times, resulting in seven separate criminal trials. Shakur’s charges ranged from bank robberies; attempted murder of two police officers; and eight other felonies related to the shootout on the New Jersey Turnpike. Of these trials, three resulted in acquittals; one in a hung jury; one in a change of venue; one resulted in a mistrial due to her pregnancy; and one in a conviction. Three indictments were dismissed without trial. Shakur escaped prison and fled to Cuba after her conviction for the death of New Jersey State Trooper Werner Foerster.

On May 2, 2013, the Federal Bureau of Investigation announced that they had raised the bounty on Shakur’s head to $2 million and placed her on its “Most Wanted Terrorists” list, making her the first woman to be so designated and effectively criminalizing the Black freedom struggle of that era.

For people wondering if Shakur was guilty, the Huffington Post reported that at the trial, three neurologists would testify that the first gunshot shattered her clavicle and the second shattered the median nerve in her right hand. That testimony proved that she was sitting with her hands raised when she was fired on by police.

According to Wikipedia, further testimony proved that no gun residue was found on either of her hands, nor were her fingerprints found on any of the weapons located at the scene. Nevertheless, Shakur was convicted by an all-white jury and sentenced to life in prison.

Amanirenas (also spelled Amanirena) was one of the greatest kandakes, or queen mothers, who ruled over the Meroitic Kingdom of Kush in northeast Africa. She reigned over the kingdom between c. 40 B.C.-10 B.C.  When Roman emperor Augustus levied a tax on the Kushites in 24 B.C., Amanirenas and her son, Akinidad,  led an army of 30,000 men to sack the Roman fort in the Egyptian city of Aswan.They also destroyed the statues of Caesar in Elephantine.

Under orders from Augustus, the Roman general Petronius retaliated, but met strong resistance from Amanirenas and her troops. After over three years of harsh fighting, the two parties agreed to negotiate a peace treaty. The Romans agreed to return their army to Egypt, withdraw their fort, give the land back to the Kushites and rescind the tax.

The brave warrior queen, Amanirenas is remembered for her loyal combat, side-by-side, with her own soldiers. She was blinded in one eye after she was wounded by a Roman. However, the full extent of the Roman humiliation has yet to be disclosed since the Kushite account of the war, written in the Meroïtic script, has not been fully decoded. 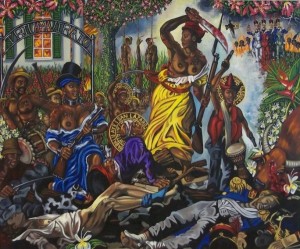 Carlota Lukumí (died 1844)
Carlota was kidnapped from her Yoruba tribe, brought in chains to Cuba as a child and forced into slavery in the city of Matanzas, working to harvest and process sugar cane under the most brutal of conditions.

She was bright, musical, determined and clever. In 1843, she and another enslaved woman named Fermina led an organized rebellion at the Triumvarato sugar plantation. Fermina was locked up after her plans for the rebellion were discovered. Using talking drums to secretly communicate, Carlota and her fellow warriors freed Fermina and dozens of others, and went on to wage a well-organized armed uprising against at least five brutal slave plantation operations in the area. Carlota’s brave battle went on for one year before she was captured, tortured and executed by Spanish landowners.

Queen Nzinga Mbande (c. 1583 – December 17, 1663)
Queen Nzinga Mbande was a highly intelligent and powerful 17th-century ruler of the Ndongo and Matamba Kingdoms (modern-day Angola). Around the turn of the 17th century, Nzinga fearlessly and cleverly fought for the freedom of her kingdoms against the Portuguese, who were colonizing  the Central African coast at the time to control the trade of African human beings.

To build up her kingdom’s military might, Nzinga offered sanctuary to runaway slaves and Portuguese-trained African soldiers. She stirred up rebellion among the people still left in Ndongo, by then ruled by the Portuguese. Nzinga also formed an alliance with the Dutch against the Portuguese. However, their combined forces were not enough to drive the Portuguese out. After retreating to Matamba again, Nzinga started to focus on developing the kingdom as a trading power and the gateway to the Central African interior. At the time of Nzinga’s death in 1661 at the age of 81, Matamba had become a powerful kingdom that managed to resist Portuguese colonization attempts for an extended period of time. Her kingdom was only integrated into Angola in the late 19th century.

Muhumusa and Kaigirwa were feared leaders of the East African Nyabingi priestesses group that was influential in Rwanda and Uganda from 1850 to 1950. In 1911 Muhumusa proclaimed “she would drive out the Europeans” and “that the bullets of the Wazungu would turn to water against her.”

She organized armed resistance against German colonialists and was eventually detained by the British in Kampala, Uganda, from 1913 to her death in 1945. She became the first in a line of rebel priestesses fighting colonial domination in the name of Nyabingi, and even after being imprisoned she inspired a vast popular following. The British passed its 1912 Witchcraft Act in direct response to the political effectiveness of this spiritually based resistance movement.

In August 1917, the “Nyabinga” Kaigirwa followed in Muhumusa’s footsteps, and engineered the Nyakishenyi revolt, with unanimous public support. British officials placed a high price on her head, but no one would claim it. After the British attacked the Congo camp of Kaigirwa in January 1919, killing most of the men, Kaigirwa and the main body of fighters managed to evade the army and escape.

However, the British captured the sacred white sheep and burned it to dust before a convocation of leading chiefs. After this deed, a series of disasters afflicted the district commissioner who killed the sheep. His herds were wiped out, his roof caved in and a mysterious fire broke out in his house. Kaigirwa attempted another uprising, then went into the hills, where she was never captured.

Tarenorerer of Emu Bay in northern Tasmania was an indigenous Australian leader of the Tommeginne people. In her teens, she was abducted by Aborigines of the Port Sorell region and sold to white sealers on the Bass Strait Islands, where they called her Walyer.

She became proficient in speaking English and took particular notice of the use and operation of firearms. In 1828, Tarenorerer returned to her country in the north of Tasmania, where she gathered a group of men and women from many bands to initiate warfare against the invading Europeans. Training her warriors in the use of firearms, she ordered them to strike the luta tawin (white men) when they were at their most vulnerable, between the time that their guns were discharged and before they were able to reload.

She also instructed them to kill the Europeans’ sheep and bullocks. G. A. Robinson, who was charged with rounding up the Aborigines, was told by sealers that Tarenorerer would stand on a hill to organize the attack, abuse the settlers and dare them to come and be speared.